Halloween – Saturday 31 October
Get your spook on at our family-friendly event. We'll be at the Visitor Centre at Te Kopahou Reserve (the old quarry building) from 5pm until 7pm.

​Save yourself some washing up and buy a sausage in bread for dinner. Prizes for the best costumes and we will have a suitably spooky activity for the whole family to get involved with.
WREMO – South Coast Emergency Planning Event - Sunday 15 November
​Sunday 15 November 2020 at Ōwhiro Bay School – 10am start.
​
This is a free two-hour session in household emergency planning for residents who live along the South Coast of Wellington. More information at www.wremo.nz.

Tickets from www.getprepared.co.nz.
Party Up a Storm! Saturday 21 November
Join us to say thank you to everyone who helped us out on the day of the big storm surge.

We're going to be at the visitor centre at Te Kopahou Reserve on Saturday 21 November from 3.30 until 5.30pm.

We'll have a sausage sizzle and a drink – if you're a local, we'd love you to bring a wee plate to share.

It's a chance to reflect on a day that is seared into our community consciousness, and to thank everyone who stepped up and stepped in on the day and since.

You can watch the video of OBRA's October 2020 AGM report below.

Welcome to this October issue of the Ōwhiro Bay Residents Association. This newsletter has it all – a survey, a petition and some very exciting local news.

We’ve been hard at work behind the scenes putting the website together – we want it to be a place where we as a community can share news and celebrate the fact we’re the coolest little suburb in the capital! It’s true! OBRA is incredibly grateful to Justin Meade for the work he has done to put the site together.
​
There’s lots of development to come – if you’ve got an idea about content or you want to get on board with the web team, simply drop us an email.

​Make sure you bookmark the site and check back regularly for the latest content.

We’ve got some great events planned for between now and the end of the year – we’re giving you some advance notice so you put them in your calendar.

STOP PRESS: Green Party co-leader James Shaw will be in our neighbourhood this Sunday (4 October). James will be at the Visitor Centre at Te Kopahou Reserve between 11am and midday. Make sure you stop by and say hello.
​
Read on for more! Please tell your neighbours about our newsletter too – we want everyone to be on our email list. Please share the link with anyone you think might be interested.

What did we learn from the wave event of April 15 2020? What needs to happen to keep us safe and thriving in the Bay?

Wellington City Council and eCoast consultants – who are running the Council-funded coastal engineering review for Ōwhiro Bay – have asked us to survey the community on what is important to us as we look to improve all aspects of our coastal preparedness for serious wave hazards and sea change.

Hearing from you is vital to ensuring WCC takes action in line with our community’s interests.  The survey will only take a few minutes to complete but could have a real impact.  It is one important way for your voice to be heard. Take the survey.

Sheep on the Run!

One of our local supporters found this picture which dates from the 70s. It shows sheep being run past 100 Ōwhiro Bay Parade and the extent of the land between the road and the rocks. We reckon it’s a great photo and a real illustration of change in a relatively short period of time. 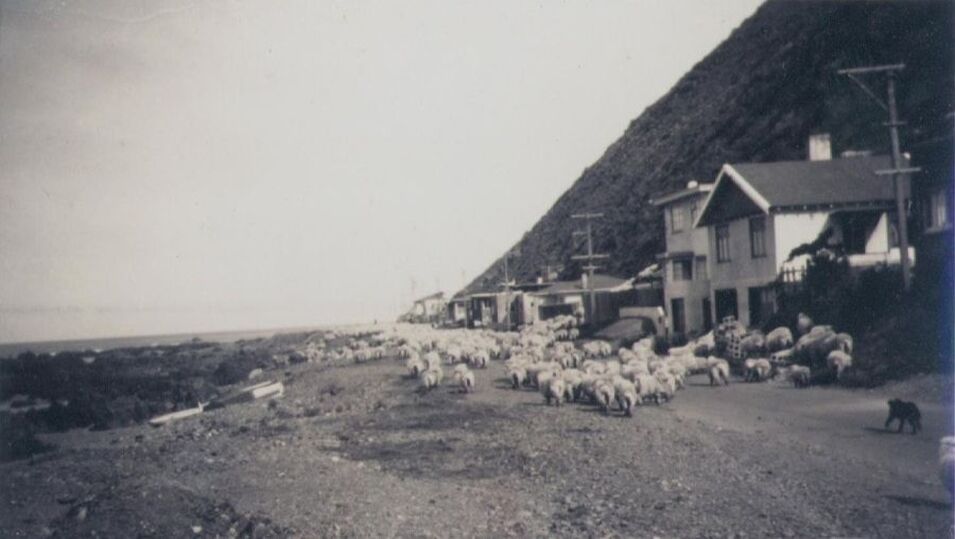 The review of Wellington’s warning systems continues following the 15 April wave surge event.  Disappointing that one of the Council officers who attended our eCoast zoom meeting told the panel last week that the Ōwhiro community were divided in their opinions as to what should be done.

Our read is that the community is very united but there are individual nuances in terms and areas that we want explored.  We’ll have to watch out for divide and rule tactics.

Good news! Our letter to the mayor and subsequent e-Petition about the Landfill extension have had a major success!

Since the last newsletter, WCC have agreed to delay applying for resource consent for the Landfill extension until next year.

We asked them to postpone the resource consent application until the report on sewage sludge treatment by Wellington Water was published and to bring the subject back to the table for a vote by council - and this has happened: the application will not be submitted until next year.

Wellington Water presents its options to WCC on 1 October (this week) and the council will discuss and publish it on 22 October. There will then be public consultation in February before a decision is made on the future of the Landfill.

The council have stated that no consent application will be lodged until this process has been completed. If you want to read more from WCC click here.

We have won a battle but not the war - it is still important you sign the e-Petition to keep up the pressure and try to get sewage eliminated from the landfill and a real waste strategy!

No longer is it acceptable for sludge to hold the landfill together; we have to stop the 15,000 tonnes of sludge going into the Landfill each year. Build soil, not landfill. Engage us meaningfully WCC! Sign the e-petition here.

A Greener City - 'Thinking Outside the Pipes'

WCC has done very little towards its zero waste goal, its dirty little secret being the need for waste to bury the sludge.

The last meeting considered Wellington’s 1,022km of pipes that push the sludge, sewage and water around Wellington.  Interesting discussions are ongoing re greener solutions to the city's development, including composting loos and kitchen waste composting.

This feeds into the Council's Planning for Growth - Spatial Plan (see below).  What we do know, is if we continue on a pathway that does not aim for zero waste we will have a system so expensive that Wellington will not be able to invest in social and equity issues.

We have made submissions on the WCC Solid Waste Management and Minimisation Bylaw changes (closed on 25 September) emphasising the need for more stringent rules and enforcement for recycling and waste, specifically at the Landfill.

The Solid Waste By-Law updates the antiquated consolidated Bylaw does not encourage waste minimisation and disposal to support environmental, social and economic benefits.  Currently 88% of WCC emissions come from the landfill.

The Community Liaison Group is a meeting between the Southern Landfill and its Resident Association neighbours.

During COVID the Southern Landfill was closed to the public until Level 2 and the Shop reopened at Level 1.

Some significant changes took place – which include contactless payment upgrades and a new layout for the shop.

Very few complaints about odour and nuisance have been received. So if you are plagued by this ... do let the council know (complaints@wcc.govt.nz  or phone 04 499 4444).

In August the Southern Landfill was to start its next full clean – stream to landfill to beach.  The next Community Liasion Group meeting is due in October.  If you have any issues you want raised, email them to OBRA.

On Saturday some OBRA committee members attended a Spatial Planning Workshop run by WCC for all Wellington Residents Associations.

Two of the main points that emerged from diverse residents were that it was agreed Wellington should have a higher density centre, but that before increasing the population density in any suburb its infrastructure, amenities, green spaces, transport and schools must be adequate; also that the population statistics on which this is based might not be correct.

Although Ōwhiro Bay is not part of the planned intensification, we are still affected by changes in Brooklyn and Island Bay with the resulting traffic and risk of sewage leaks downstream, significantly putting at risk our taonga – the marine reserve and Zealandia.

The Southern suburbs infrastructure is already struggling with recent new developments; WCC must invest in improving the infrastructure before in-fill building occurs. We will also be on the receiving end of increased construction and demolition waste going to the landfill.

Make sure you have your say by making a submission. Submissions close on 5 October. ​

Here is Wellington Water's brief statement on it:

It is called the Proteus Probe and it allows us to monitor various water quality parameters in real time, including some microbiological measures. AT the moment, there is a delay of 24 hours or more to receive results from the lab, where water quality samples are cultured to evaluate e.coli levels.

All data from the Proteus Probe can be sent straight through to any web-based dashboard or mobile device. Results and data from the trial will also be shared with residents through the association’s technical leads.'

September 30 sees the launch of an unprecedented collaboration between Greater Wellington Regional, Wellington City Council, Wellington Water, Regional Public Health and the Ōwhiro community to address the challenge of restoring the Ōwhiro Stream and Ōwhiro Bay to good health.

​The Ōwhiro catchment is to be the pilot programme for what will be the region’s push to meet the Government’s National Policy Statement on Freshwater Management for our waterways over the coming 20 years.

Starting in January 2021, the City’s first roving crew will start in the Ōwhiro Stream and progressively investigate every private and public source of faecal contamination.

The multi-party team (GWRC, WCC, Wellington Water and the community) will then work to ensure the sources of contamination are eliminated from the waterways and our entire beach returns to swimmable as soon as possible.

The Taskforce has completed its work and the report is due for release shortly. Its recommendations, if actioned by WCC, will have significant beneficial impacts on the state of the city’s water infrastructure, and freshwater and coastal marine environment. Watch this space. ​

Dates for Your Diary

AGM – Sunday 11 October. We’re going to be meeting at the Beach House Café and Kiosk. More details to come but we’d love you to have a think about becoming involved with one of our sub-committees – it’s not at all onerous, but we’d love to meet a few more of you! Halloween Event – be prepared to be spooked. We’ll be having a child-friendly Halloween Part on Saturday 31 October. Venue to be settled on but we can confirm that scary costumers will be essential.
Ōwhiro Bay “Calm after the Storm” thank you party – Saturday 21 November. SAVE THE DATE – DETAILS TO COME. ​​​​